Today I had to go to CSMT (Chatrapati Shivaji Maharaj Terminus) for some work of one of my NRI client. Usually I try to avoid coming to this side of town, especially by car, for the following reasons :

So today I decided to take the local train instead.

While going I found everything usual (as those accustomed to Mumbai life knows), but while returning after completing my work to CSMT station I noticed something.

Between Mumbai mains and Mumbai Mail/ Express platforms corridor there was a gathering of crowd. I normally do not pay much heed, but then I heard some voice coming from a loudspeaker.

The voice quality was not very good, as from those high-quality speakers which we are used to listen to now, so I paid some attention.

As I approached the commotion, I saw five uniformed men (with placards around their neck) and two Police personnel on either side of them standing in a row. The one in the center was speaking through the mic.

I was surprised by what I heard. These group of men were asking people to walk the right (proper) way.

“KEEP LEFT” is the signage we all have seen at Railway station FOB (Foot Over Bridge), isn’t it?

So what made them do this I wondered. One answer which came to me was that not everybody is literate so they might not be able to read the signage.

But then what about those who can read? Are they following the instructions on signage?

Probably not, maybe that is why these gentlemen have to come out and say it loud right in the middle of the crowded station where most of the people passing through this place can hear and at-least then walk on the proper side of the walk-way. 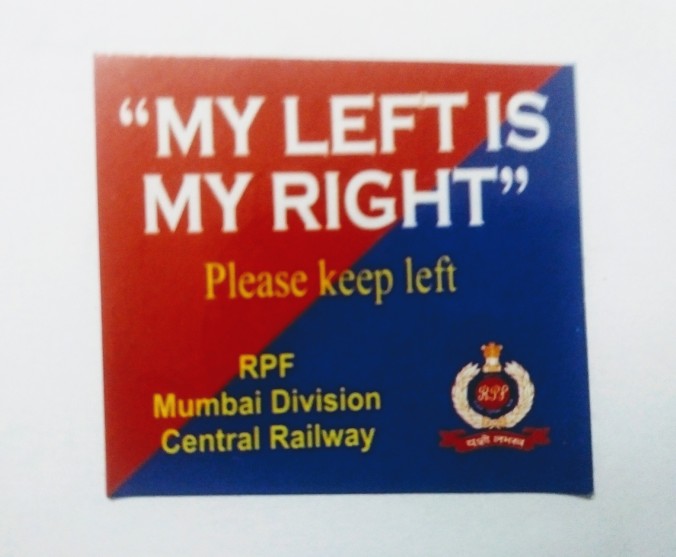 The giveaway they were distributing

I felt very bad about what they were doing. Not because they were spreading awareness, but because of the bitter fact that we as citizens have become so careless and irresponsible that even the basic social etiquette such as this is something which needs to be reminded to us.

Mission Swatch Bharat was something our honorable Prime Minister Narendra Modiji had started and fruits of which can be seen now. Though there is still a way to go but at least people have become aware and are contributing to keeping their surroundings clean.

Are other Railways (North, West, South, East etc) also have been commissioned for this kind of awareness drive?

We often blame the government for not doing this and not doing that, but then are we as citizens acting responsibly?

If yes, then what was the need for ‘Swatch Bharat Mission’ , “Beti Bachao, Beti Padhao”, “Ghar Ghar Toilet”, “Save Water, Save Trees”, and several such other missions and initiatives?